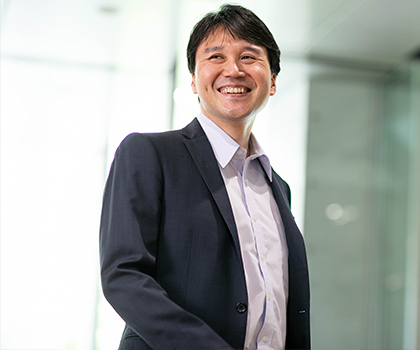 Brain machine interfaces (BMI) are a technology to infer human thoughts by decoding brain signals. It can be applied to severely paralyzed patients to reconstruct their motor function and communication ability. For completely paralyzed patients such as severe amyotrophic lateral sclerosis (ALS), BMI may be the only method to express their thoughts. I have developed a BMI method using electrodes implanted inside the human brain (ECoG-BMI).

So far, we have applied ECoG-BMI in paralyzed patients due to stroke and severe ALS to show that they could successfully control a prosthetic hand through their brain signals. In a severe case, we have allowed one patient with ALS to successfully control a PC to type words using the BMI, although he had almost no ability to move his body all. Moreover, I’m now developing a new treatment method for phantom limb pain, which is one of the most intractable forms of pain.

We expect BMI may be a novel method to reveal the underlying mechanisms of phantom limb pain, and may give rise to new ways to relieve the pain.